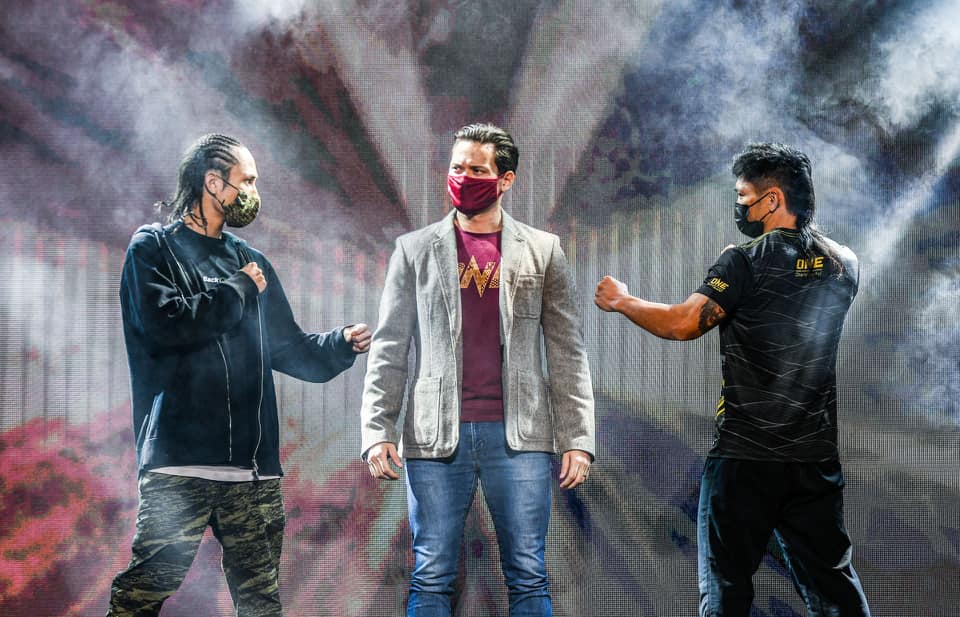 Adiwang is Back, a victorious clash with Kawahara

Before the match of Lito “The Thunder Kid” Adiwang against Namiki Kawahara of Japan, there had been lots of talks that Adiwang will use this as a stepping stone to get a rematch against Hiroba Minowa.

Head Coach and CEO of Team Lakay, Mark Sangiao has said that this would be an exciting fight.

“Lito Adiwang versus Namiki Kawahara is going to be another exciting fight. That’s for sure. Lito is never in a boring fight. He always comes to win and he’s always explosive. We like this matchup.”

The training background for Kawahara is well known to be tough, but Adiwang has every move planned.

The first round of their clash had them testing the waters, where both of them exchanged blows, but Adiwang has been showing aggressiveness with his striking. During the second round, he knew there’s no more playing around. Right before Kawahara would even plan to strike, Adiwang gives him a left explosive punch that made Kawahara drop to ground. Adiwang was about to strike but the referee calls it done. A victorious win by knock out.

Like any other Team Lakay athlete, time and time again, Adiwang is shown to grow and evolve into someone better. Sangiao quoted that he sat with Lito to talk over the things with this match.

I sat down in the gym with Lito and we went through the book. We went over everything about this fight and Lito’s career moving forward. He’s constantly evolving and getting better at a fast rate. I believe we have the table set for the Lito-Namiki match. Of course, everybody will say they’re going to win, given any contest, and we’re no exception. We’re gunning for the victory in any way.

Adiwang posted on his social media account a few hours after the match about what happened, thanking his Team Lakay Family, Coach Sangiao and God above all else.

Words can not express my gratitude but I pray that God may bless each and every one of you and I will do my best not to let your support and prayers go to waste. We got this victory together. Namiki Kawahara, Doumo Arigatou Gozaimasu! Let’s keep the true meaning of Martial arts burning.

Adiwang also made a hashtag, “mama this is for you”, showing that the fight was dedicated for his mother.

Kawahara posted on his Facebook Account that he is waiting for a revenge match and that once his injury is healed, he is back to action in ONE FC.

Late post! The match was decided nine days ago and I fought at Singapore. My opponent was Lito Adiwang, the strongest striker in the Strawweight division. It was a good experience, to begin (?) as a world champion. I told him that he should wait for my revenge. I grew a lot from this fight. Safely, I was able to sign a contract with ONE. Once my injuries are healed, I will aim to be a champion again!

What’s next for Lito Adiwang? Only time will tell!

Here you go, our fight card on the 3rd of June and we have Team Lakay Jenelyn OLSIM going head to head with Julie Mezabarba of Brazil! The originally scheduled match between Joshua Pacio and Jarred Brooks for the ONE Strawweight World Title has unfortunately been postponed due to a scheduling conflict.#ONE158 | 3 June——————————FOLLOW US ONLINE: Like and Subscribe to our YouTube Channel “Team Lakay” 👇 for our vlogs, stories and journey. www.youtube.com/c/TeamLakay/Visit our website👇teamlakay.net/And help us grow on Patreon:www.patreon.com/teamlakaymma#MaytheMightyForceAlwaysbewithus#OneJuneSingapore#OneChampionship #TeamLakay#Championsarenotborntheyaremade ... See MoreSee Less