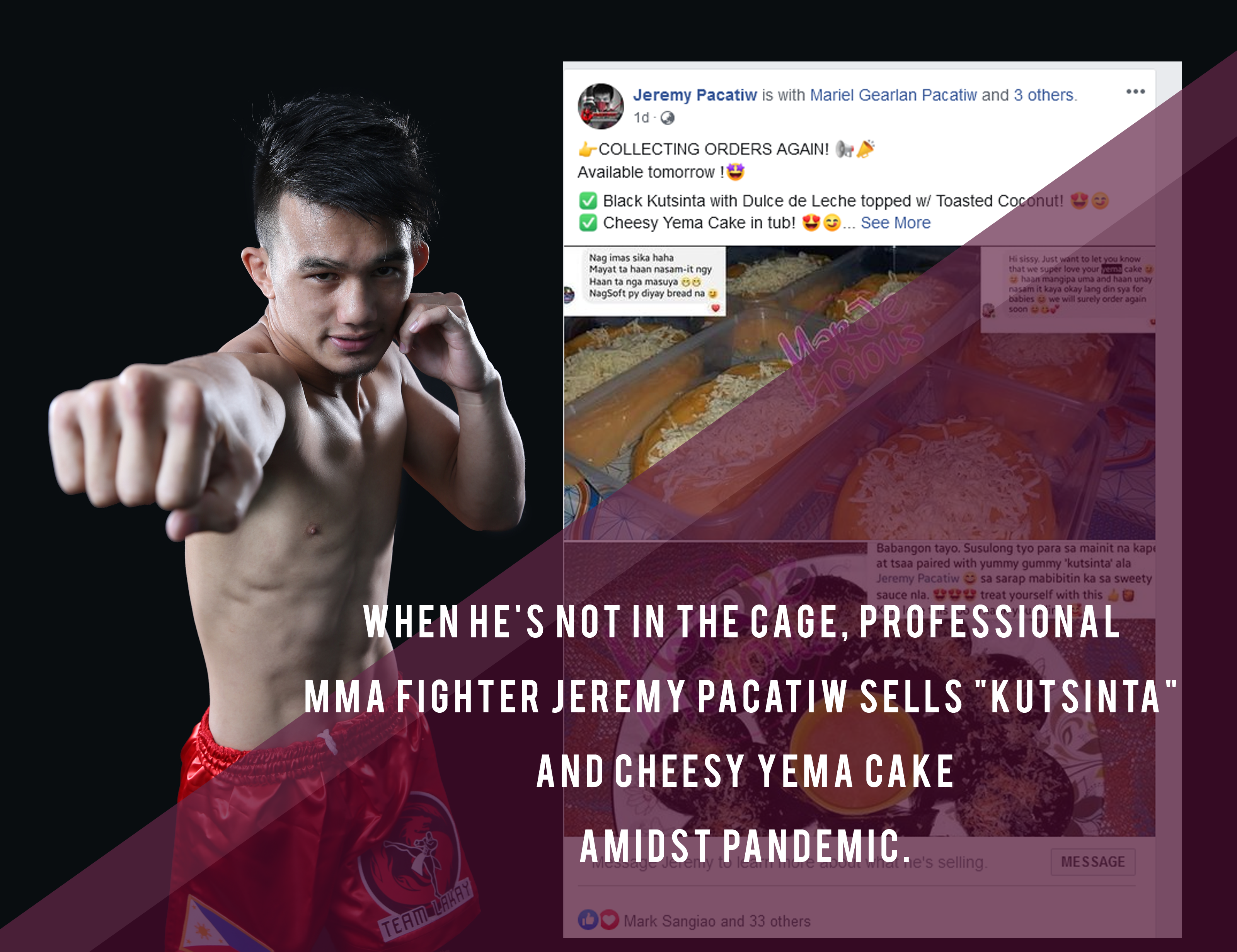 When he’s not in the cage, Professional MMA Fighter Jeremy Pacatiw sells Black Kutsinta and Cheesy Yema Cake amidst pandemic

The entrance of the year 2020 has affected us greatly socially and economically. The bustling noise of the city turned into silence, the aroma of the street foods are reduced and the people with their businesses have been closing one after the other. However, these things did not hinder Pro MMA fighter Jeremy Pacatiw to persevere and gets things right.

His debut match at the PXC Laban against Jiar Castillo where he won via unanimous decision carved his name in the world of MMA. With his current record, 10-4, surely, many people have learned the name “Jeremy Pacatiw”.

He is planning to get into the police force someday and according to him, when fighting in the cage is over for his career, his achievements academically will be his turnabout.

When the pandemic made a strike, Pacatiw’s matches have been halted in the Brace CF. However, this did not stop Jeremy to think of a good plan for business. During the quarantine days, with his girlfriend Marjorie, the couple decided to get hands on making black kutsinta with dulce de leche topped with toasted coconut and Cheesy Yema Cake, which they sell personally and online – where it is backed by their large following via social media.

“It started for personal consumption then we tried posting it online to sell since Marjorie is a blogger. We tried selling kutsinta then the orders came flowing,” said Jeremy.

Influenced by the philosophies of Team Lakay Head Coach Mark “The Machine” Sangiao, Jeremy made MMA a part of his lifestyle. The rough training continues, even without a match held for them. You can always see Jeremy and the other athletes sweating and training their gears at the Team Lakay Gym.

Being an MMA fighter is hard and the schedule runs full time, so the couple devised a way for the business not compromising his job.

“She does the cooking while I do deliveries. We get more than 30 orders a day so it can be tiring as well. I think this is a feasible source of income because people nowadays look for food without having to go out,” said Pacatiw.

“Marjorie makes it while I’m in training then I do deliveries when done at the gym. Sometimes we prepare it at night then I deliver it before I go to training.”

It is a testament of the Filipino’s fighting spirit that even if the world is harsh and life is getting harder, we always find ways to stand up and rev ourselves to survive and live.

“MMA taught me to be mentally tough which is why I have this ‘can-do’ mindset despite our situation,” Jeremy said.

« Kevin “The Silencer” Belingon: Getting to know the former ONE CHAMPIONSHIP Bantamweight Champion